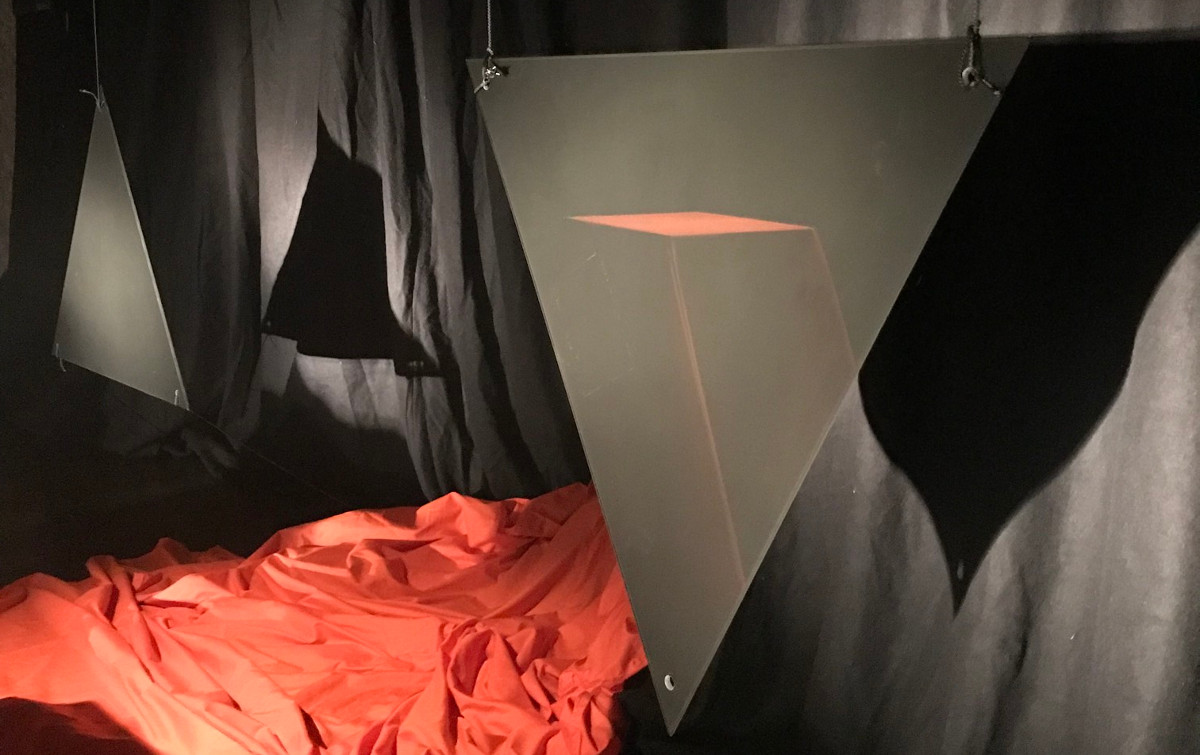 A 6000 strong audience converged on Salamanca Arts Building over 11 days, greeted first by a 4 meter high quote from The Book of The Law, new works from Barry William Hale; live performances from Noko; the biggest selection of Harry Smith films ever shown in Australia; the Australian premiere of the photography of William Mortensen; live Sak Yant tattooing; and the installation and performance series Tohu V Bohu.

OTO member, Frater I.V.V. made the long flight to Tasmania to get amongst the action.

Thursday morning and my social media is full of alerts of OTO Brothers and Sisters travelling to Hobart.

A Sister posts her coffee receipt number – the auguries are auspicious, #156. A few days before I’d been at home clearing out clothes. There’s a heap of OTO t-shirts, including a Barry William Hale from 1998, Redheads Babalon 156 Pomba Gira. The ’98 classic is too good to go, but it’s covered by a strange mould. I wash it to no effect and it will have to be chucked. Time to let go and enter the continuity of creativity in the Invisible House, untouched throughout the centuries, “though with fire and sword it be burnt down and shattered”. The underground stream.

Touch down in Hobart and the streams bubbling into a river. This island is something different from the mainland, let alone the psychic sink of big city Sydney. Opening night at the Salamanca Arts Centre orientates us into the Invisible House, and a chance to meet the OTO core of the descending tongue of grace. We get talking to another local who reveals he’s subject to riding a hypnogogic wave at any time. He tells me of wars in heaven and astral operatives running rescue missions, and hell, who am I to argue – “an invisible house there standeth.”

Shiva X° is invited to speak to the packed crowd. He highlights the significant tradition of Enochian in the Southern Land and taking it up a few more occult octaves, invokes Dark Mojo.

The Noko setting is a room dedicated to Barry William Hale’s signature Enochian letter pieces – living forces artfully resonant and present. Ave! Noko (Noko-man, Barry, and Scott) open the show with the first permutation of an extended ritual performance. Meanwhile the language of Angels and the Throne room of God have hit Tasmanian lounge rooms and public bars thanks to WIN television news report on the Dark Mofo opening, stealing some of the promotional thunder of a 3-day resurrecting God performance piece beginning across town.

Invisible House curator and artist,the man known as Frater Hermellyon, has an excellent installation piece in the show – TohuVBoho – a beautifully constructed temple of light subtly responding to a single piece of music running to many hundreds of hours and the work of decades. I constantly return to TohuVBoho throughout the weekend “for the place whereon thou standeth is holy ground.”

Frater Hermellyon also features on the syndicated WIN news report being tattooed by Ajarn Ohr. I become familiar with Ajarn Ohr’s room in the House at a remove, seeing a few of his blessings and empowerments.

Through typically dim-witted ‘group think’ my immediate Hobart crew and I miss the scored performance of Harry Smith’s early abstraction film pieces, but we luckily catch a documentary about Smith’s Folkways Smithsonian American Music collection, music that sparked and fuelled significant social and cultural development. The film highlights something true for the Invisible House; art and curation as a magical act making the culturally invisible PRESENT. The William Mortenson photos are indicative of this – photographic portraits created decades ago, creeping sideways into the 21st century.

Only in Hobart for the weekend, I leave with the House having plenty of time to play out, but I realise that in making the culturally invisible present, the Invisible House is not a glimpse into a single star or vision but a space for stars and constellations to indwell and that Force and Fire do not destroy but transform.

“Light, Life, Love; Force, Fantasy, Fire; these do I bring you: mine hands are full of these.”